In this occasional blog series, the team at Bruce Castle Museum look at the heritage and stories from the area around Finsbury Park. First up: Green Lanes.

In this blog we put the spotlight on one road in the borough: Green Lanes, and in particular the part that covers postcodes N4 and N8, in the area called Harringay, with its exciting mix of current, diverse cultures and communities and a long, rich heritage which might not seem evident to most people today passing through.

Green Lanes is one of London’s longest roads at 6.3miles (10.1km) long. It forms part of the A105 which leads people north out of London, or takes them right into the heart of the city. Green Lanes’ northern point is Winchmore Hill in the borough of Enfield and its southern end is at the north/west point of Newington Green on the Hackney/Islington borders. It enters the borough of Haringey at Lyndhurst and Lascott’s Roads (where it is called High Road) and leaves the borough at the south-eastern tip of Finsbury Park, at the corner of Seven Sisters Road. 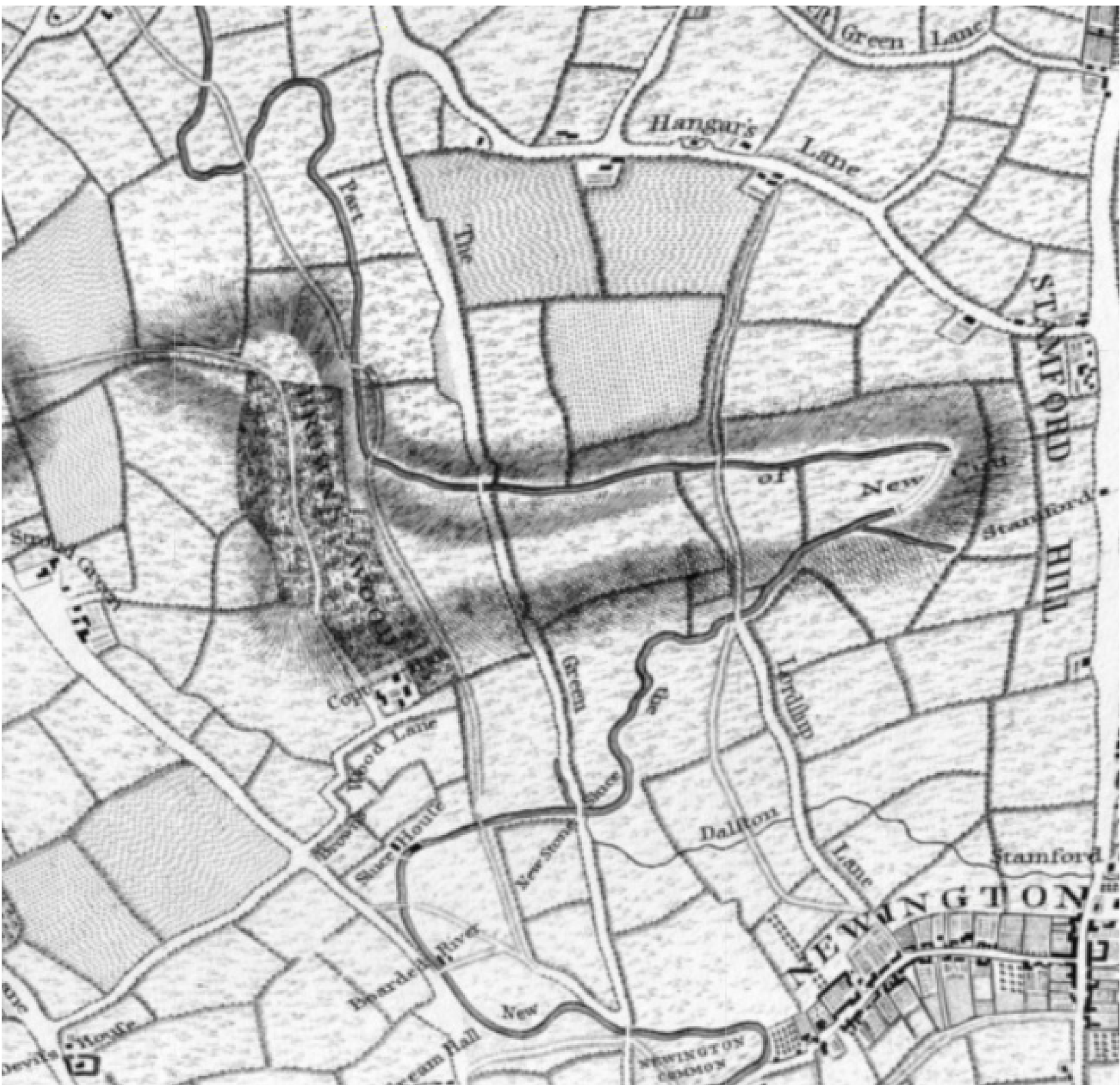 John Rocque's London 10 Miles Round Map (1746) showing the lower part of the road, available on Layers of London

As the name suggests, ‘Green Lanes’ wasn’t always one of London’s main arteries. Used as a track through dense woodland in Roman and then Anglo-Saxon times, by the 1500s the road was an established route of linking lanes which ran from Edmonton into the City of London. The road connected manors and estates with villages along the route, and was used by drovers taking their cattle from outer Middlesex and beyond down into the Cattle Market in Smithfield at the edge of the City of London, for sale and slaughter.

With the increase of traffic – first the horse-drawn carriages, then omnibuses and trams and finally automobiles – the road has been straightened and widened over time, but its course has remained essentially the same since the 17th century, running roughly parallel to the New River (here are some images of the New River posted on Harringay Online). 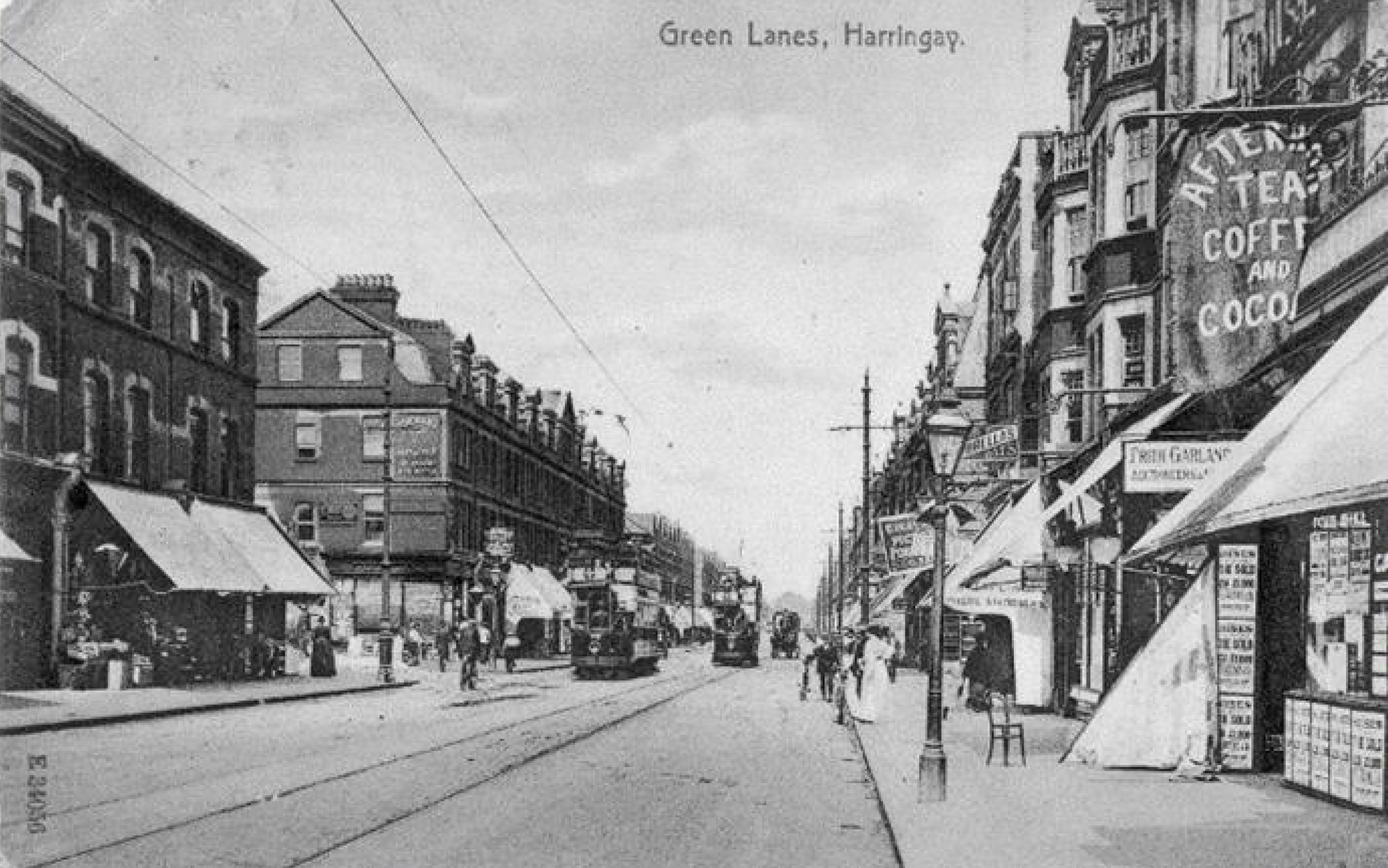 With the coming of the railways and Harringay Park Station opening in 1885, Green Lanes was growing with its residential streets and busy commercial roads, becoming a thriving business hub. You can read about How Harringay Happened from the book of that name by local historian John Hinshelwood. 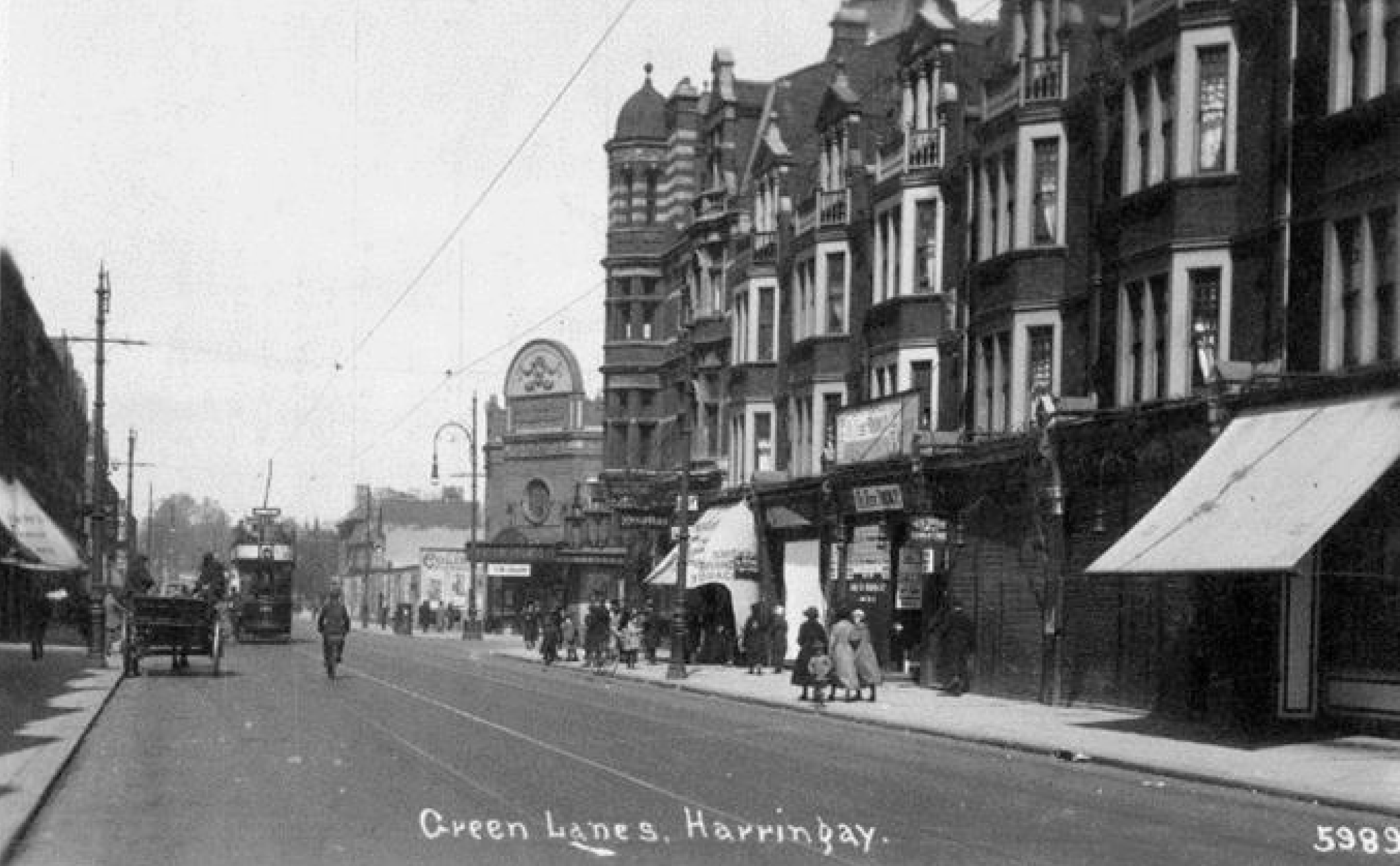 Green Lanes looking north towards Turnpike Lane with The Salisbury pub and its dome seen on the corner of St Ann’s Road. The Electric Coliseum Cinema (which opened in 1913) and its ornate façade is just beyond, c.1915. From the collections and © Bruce Castle Museum (Haringey Archive and Museum Service)

The images of Green Lanes (above) from around 1915 shows a bustling street full of commerce, with trams taking people up and down from the north and south of the borough and beyond. It looks like you would be able to buy a range of products there at that time, and there was the newly-opened cinema too.

From the 1950s and the decades that followed, the area has attracted many different cultures and communities, coming from such places as Albania, Cyprus, Ethiopia, Somalia and Turkey (to name just a few!), as they have made their home in Harringay / Haringey. Luckily for us we can enjoy the wonderful world food culture of Harringay – evident in the array of food stores, cafés and restaurants that populate the road and something that Green Lanes is famous for. 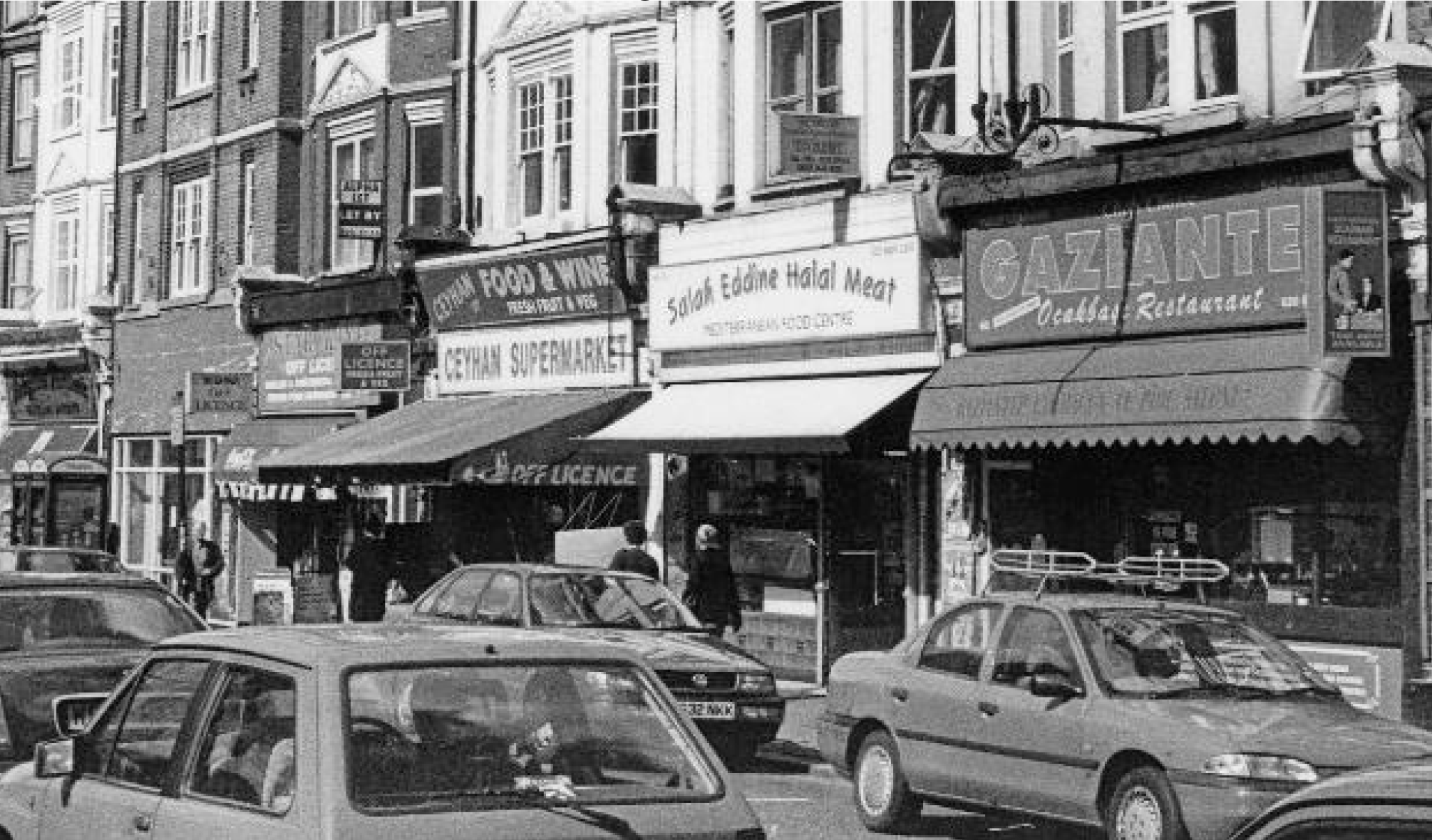 Green Lanes c.1985-1990, showing a few of the many restaurants from different cultures and communities. From the collections and © Bruce Castle Museum (Haringey Archive and Museum Service)

For anyone interested in the many different communities living and working along Green Lanes and their food and culture, we suggest having a look at this walking tour starting at Turnpike Lane and heading down to Clissold Park. It looks at some of the interesting and historical buildings along the way, as well as the amazing cafes and restaurants (hopefully reopening now or very soon at least). I’m hungry just reading this post!

So now we will head up Green Lanes and look at the section between Turnpike Lane and Lordship Lane and talk about a significant estate that was situated at that site. From the mid-13th century the land bounded by Lordship Lane to the north, Green Lanes to the west, the Moselle River on the eastern side and West Green Road at the south was known as the Manor of Duckett’s, part of Tottenham. Its name was taken from Laurence Duket, a goldsmith and landowner, when he acquired the land in 1260; the estate was also known as Duket’s and later, Dovecotes.

From that point, the estate was held by a procession of well-connected gentry, including the king's tent-maker John of Yaxley in 1334 and Sir John Stanford, a Justice of the Common Pleas in 1346. In the mid-1400s it was bequeathed to St. Bartholomew's Hospital in Smithfield, which held other land throughout north London. The monks of St Bartholomew’s did not farm the land themselves but leased it to farmers gaining both an income and farmer’s produce as rent.

In 1532 the estate was leased to Sir William Brereton (1487-1536), Chamberlain of Chester and groom of the Privy Council, who was the brother of the Master and Custodian of St Bartholomew’s. This was the very same gentleman who was beheaded for treason in 1536 (along with four other men) over an alleged affair with Queen Anne (Boleyn). She, of course, was beheaded the next day for treason and adultery, and Henry VIII was then free to marry his third wife, Jane Seymour, a whole 13 days later!

The Queen’s Head pub was just opposite the site of the Duckett’s Manor house. A fabulous emerald ring found here in 1898 and made of 14th century gold, was surely fit for a noblewoman, and as its inscription was in French, perhaps someone with links to France, either living here, or passing through visiting a ‘friend’ in this particular area.

At the dissolution of the monasteries, Henry VIII seized Duckett’s Estate and in 1547, granted it to his Yeoman of the Wardrobe, Sir Richard Cecil. Others to have held the property were Cecil's son Lord Burghley, Lord North, William Parker (a London draper), Lady Anne Compton (1523-1588) of Bruce Castle, Thomas Sutton (the founder of Charterhouse), the soldier and politician Sir Francis Poppam in 1619 and then Sir Edward Scott 20 years later. That’s quite a list of noblemen/women and merchants linked to the property! 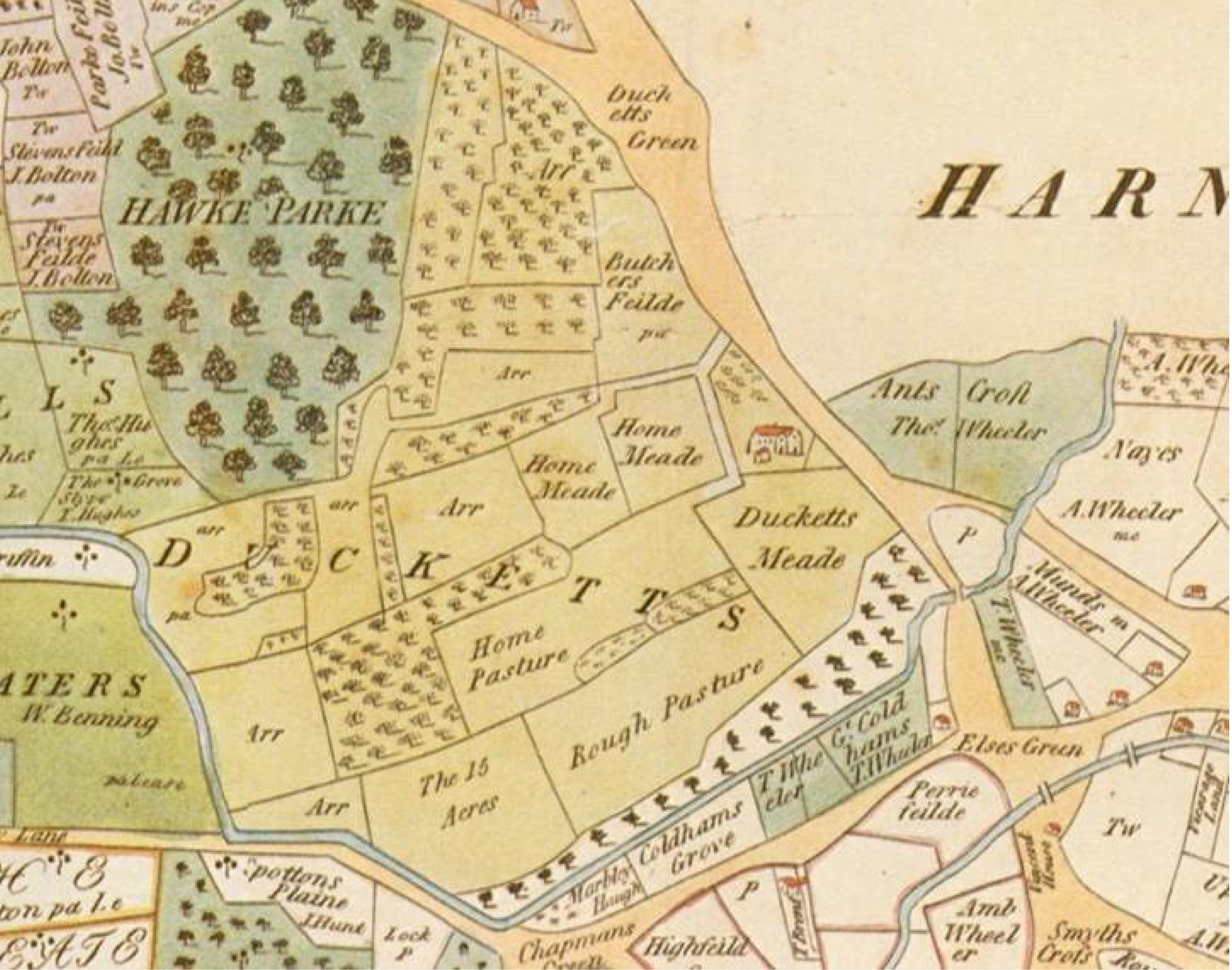 You can see the extent of the estate in this detail (above) of our 1619 map of Tottenham, being bordered to the north and east by the Moselle River (remember this map is looking south, so it seems upside down). The manor house is visible on the map, located to the north of where Turnpike Lane Tube Station is today. Over the next 200 years the property was portioned into smaller sections and purchased by a number of different owners who leased it for farming, including Grainger's farm-house, built between 1818 and 1844 on the south side of Lordship Lane, which survived until the 1890s.

Plan of Duckett’s Estate c.1840, you can see the distinctive moat around the homestead. From the collections and © Bruce Castle Museum (Haringey Archive and Museum Service) 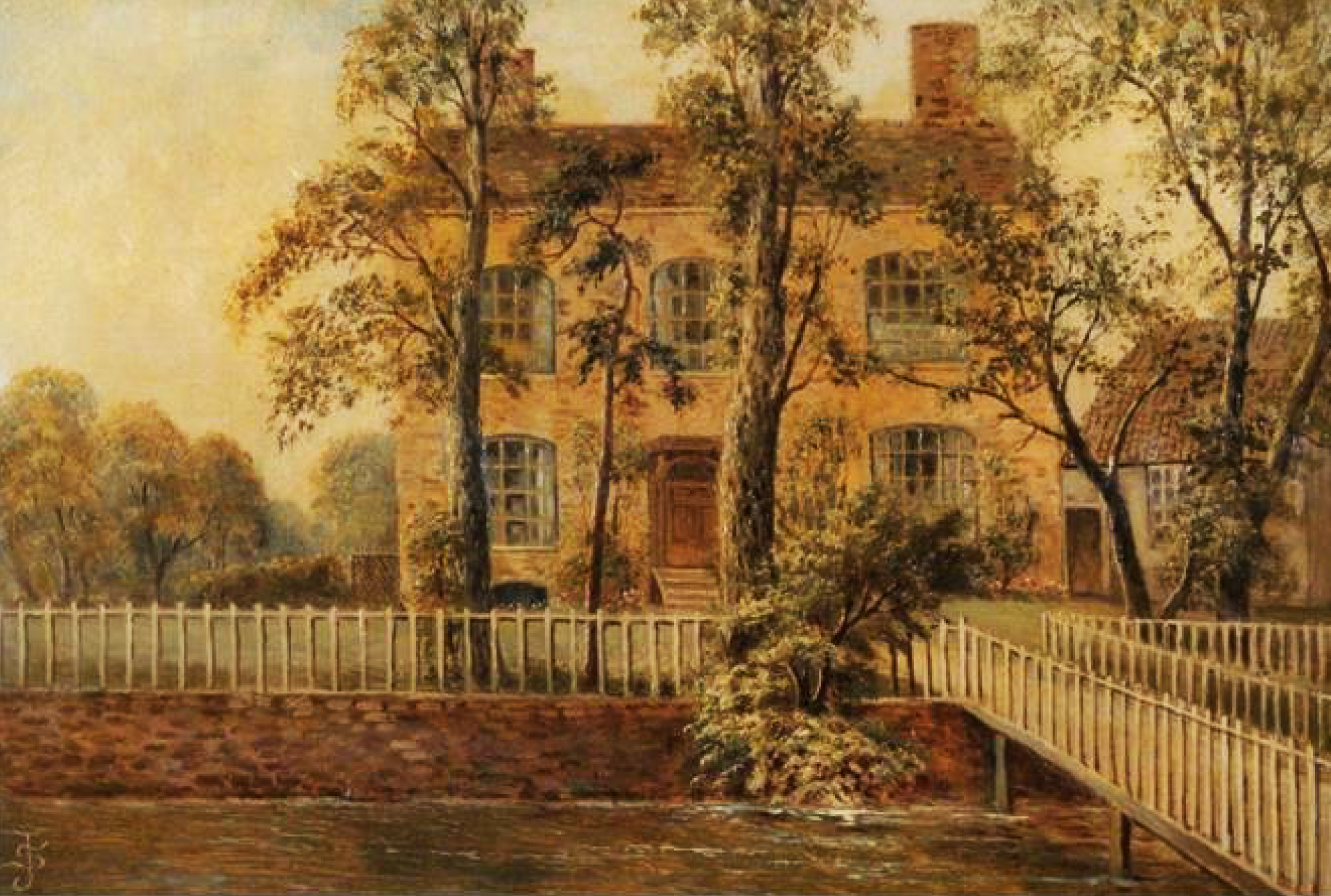 A painting of the Duckett’s Manor House by ‘J.S.’ c.1870, showing the bridge over the moat. From the collections and © Bruce Castle Museum (Haringey Archive and Museum Service)

There is a good discussion here about Duckett’s Manor or Dovecote House – the name it became known by in the mid-1800s. The estate included a gate house and farm buildings from the 1500s. It was surrounded by a moat until the 1860s which was fed by the New River and could be crossed by a bridge. The last occupant of the large house was recorded in 1881, shortly before most of the land was taken for the Noel Park estate and the house was demolished as part of the redevelopment. 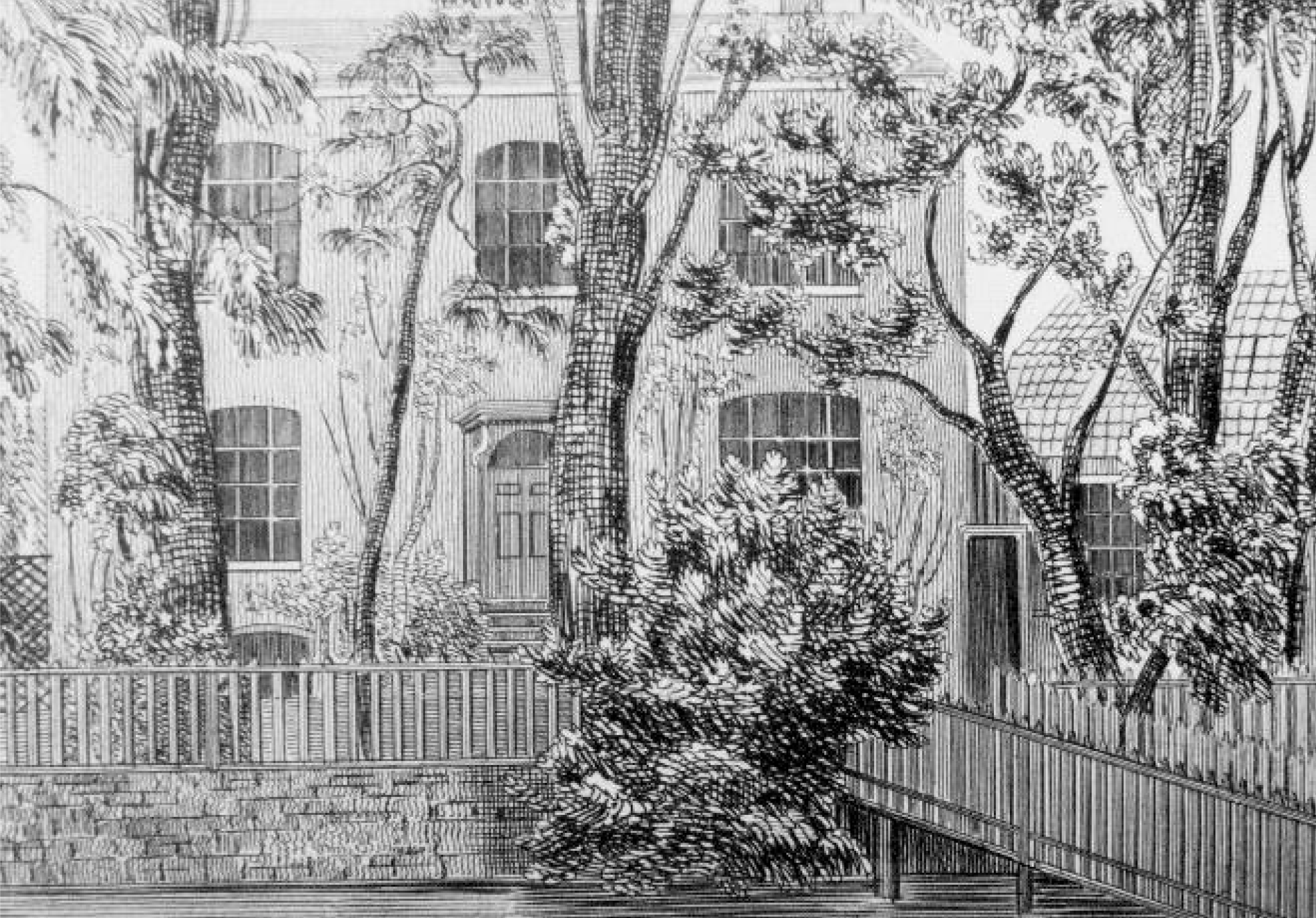 Another view of the homestead at Duckett’s, c.1840. From the collections and © Bruce Castle Museum (Haringey Archive and Museum Service)

Although the estate and house are no longer with us, the Duckett name lives on in the area. 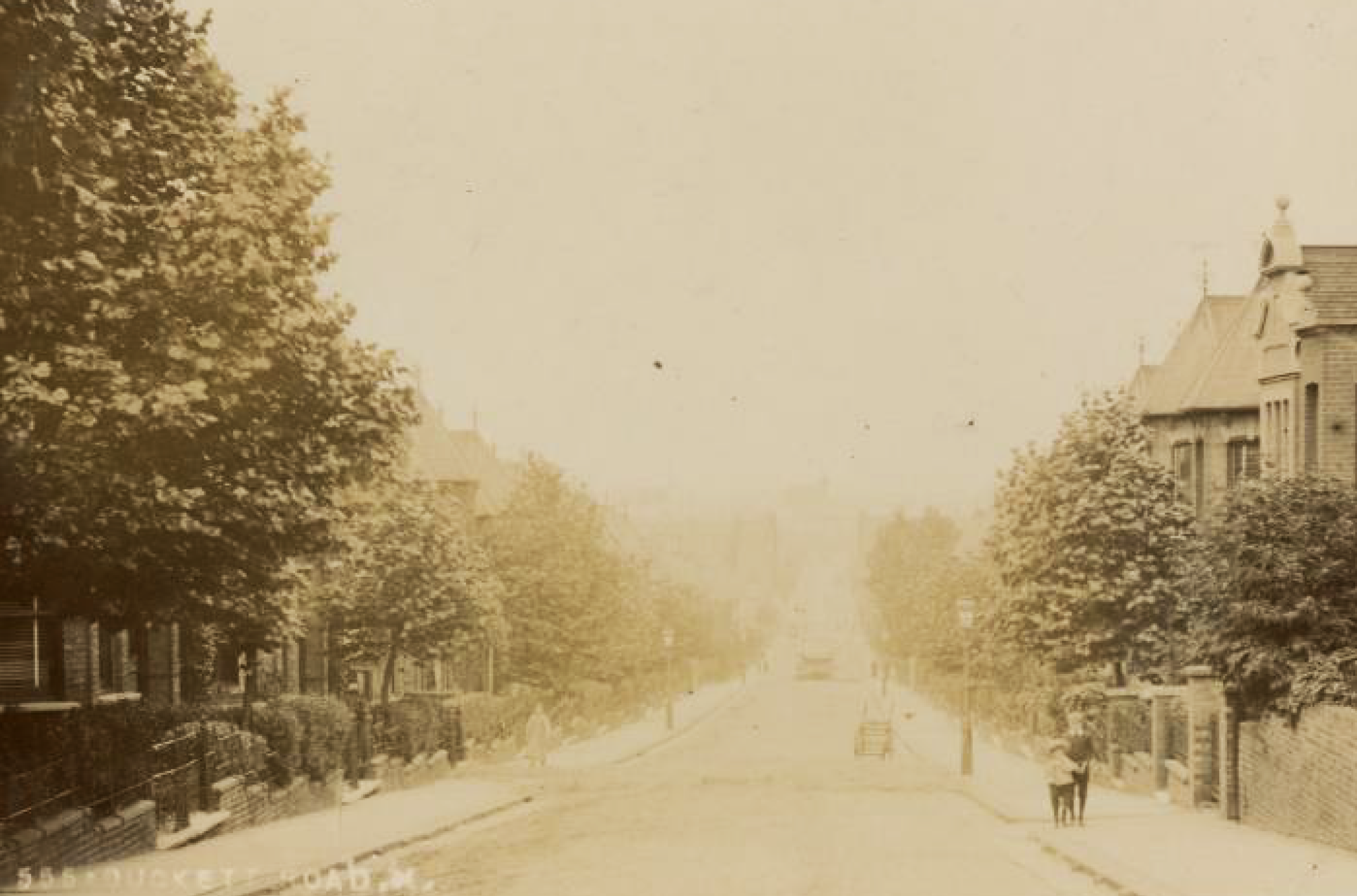 Duckett Road on the Harringay Ladder, c.1900. From the collections and © Bruce Castle Museum (Haringey Archive and Museum Service)

On the Harringay Ladder you have Duckett Road and of course there’s Duckett’s Common, all just off Green Lanes. The Common has its own recent stories, with links to protest and activism. On 23 April 1977 it was the site for the Battle of Wood Green, when anti-racists stood against the National Front as they marched from Wood Green. This article by Keith Flett gives a first-hand account of what it was like to be there fighting against racism, standing alongside BAME communities, councillors, trade unions and Haringey residents.

Above is an advertisement for the 40th Anniversary in 2017 of the Battle of Wood Green commemorative event at Duckett’s Common; we also had had a talk by Keith Flett and Dave Morris at our Local History Fair at Bruce Castle in February 2017. The image was taken from an article at the time of the rally in 1977.

Other rallies and protests have been held on the Duckett’s Common from the 1970s onwards including LGBTQ+ protests for rights and against the Section 28 bill in the 1980s. In 2018 a Haringey Pride event was held to commemorate the people who campaigned for LGBT+ rights and the protests they held in the borough.

Last year in 2019, Duckett’s Common was centre stage for the new midnight basketball sessions for young people to help lower knife crime, led by the inspirational mentor and amazing community sports leader Hesketh Benoit (pictured below) and the Haringey Sports Development Trust. You can read all about it here, with a short film too. In the basketball tournament held last September, we hear that the Mayor Cllr Sheila Peacock, when challenged, managed to get 3 out of 4 balls in the basketball net! 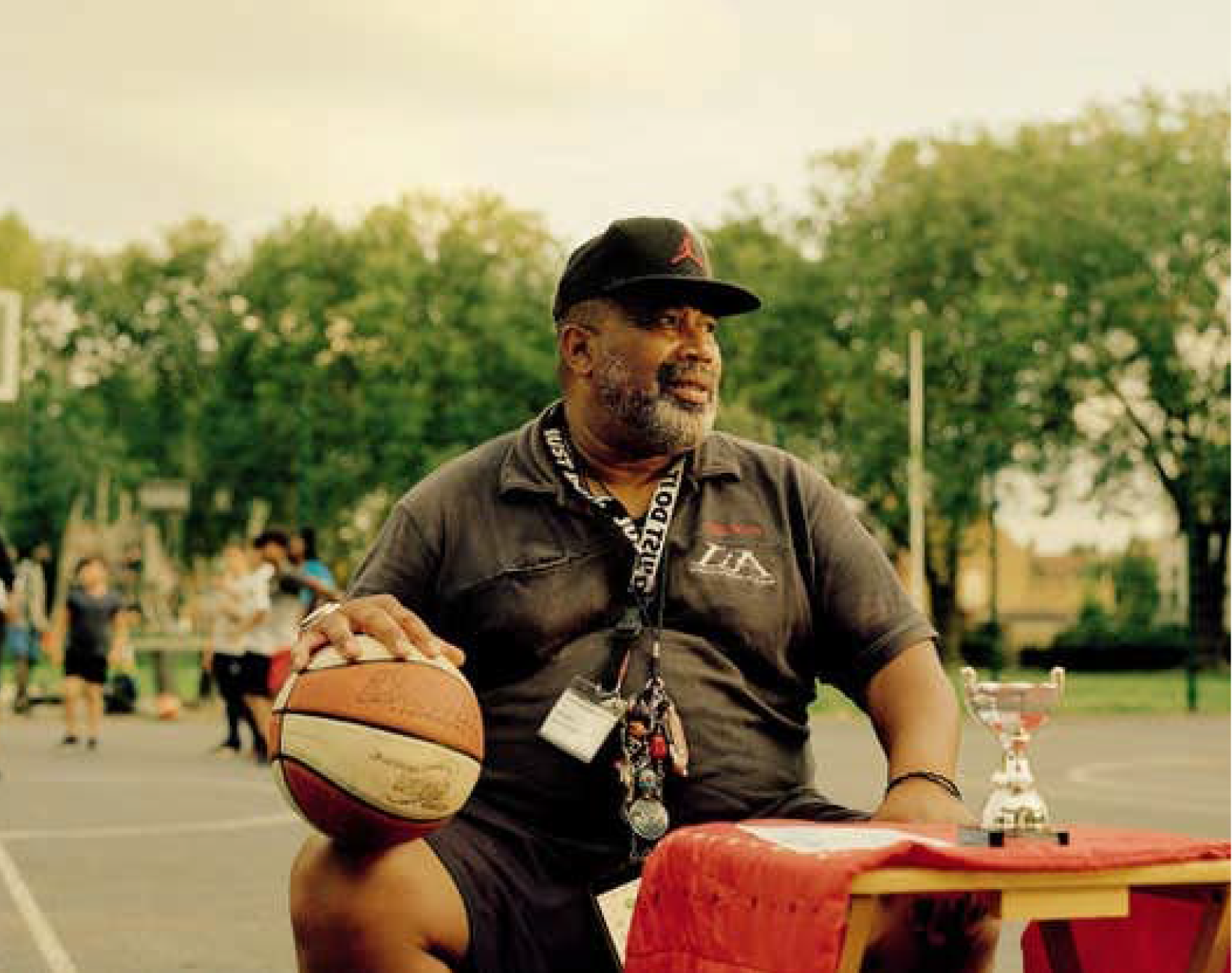 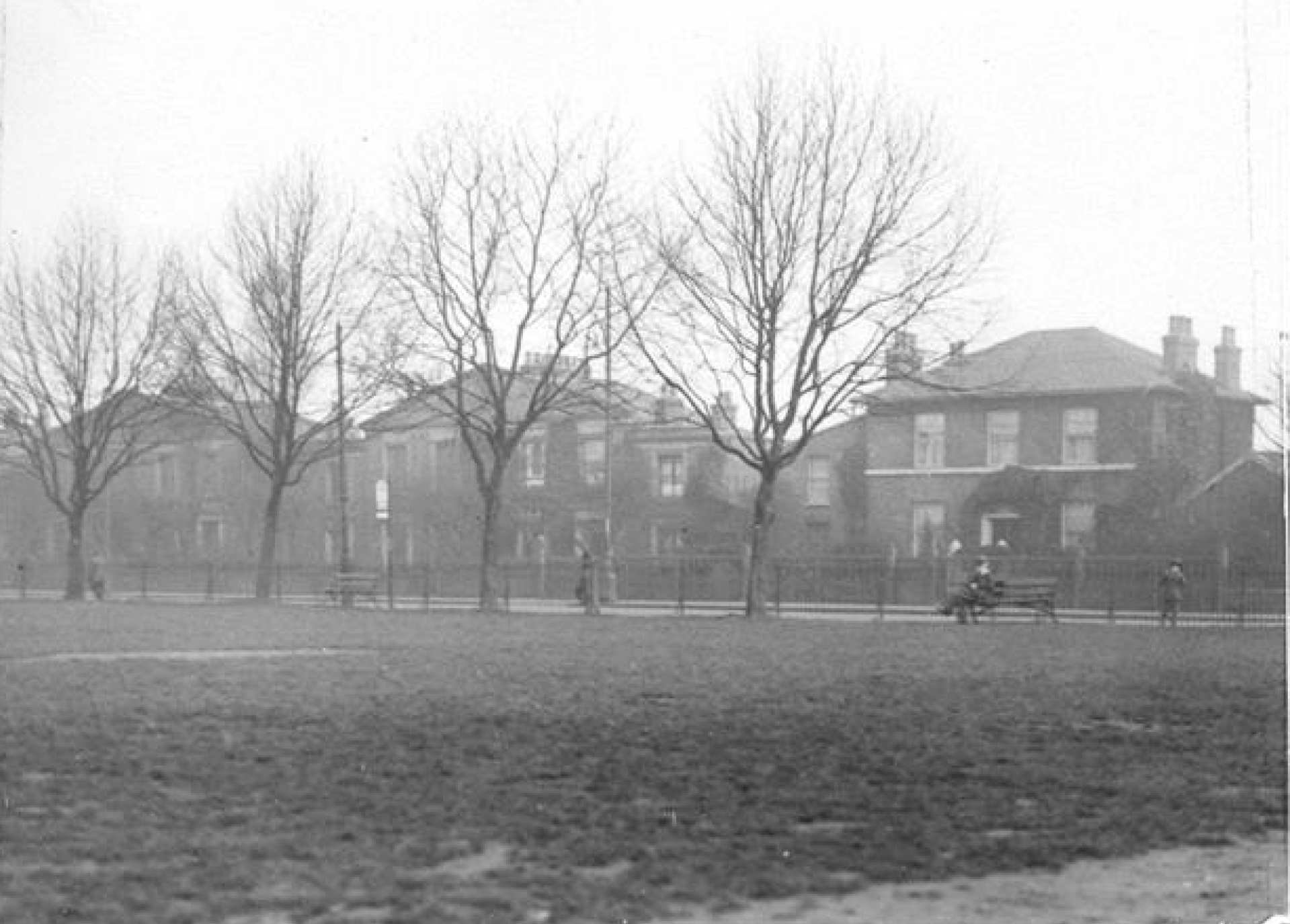 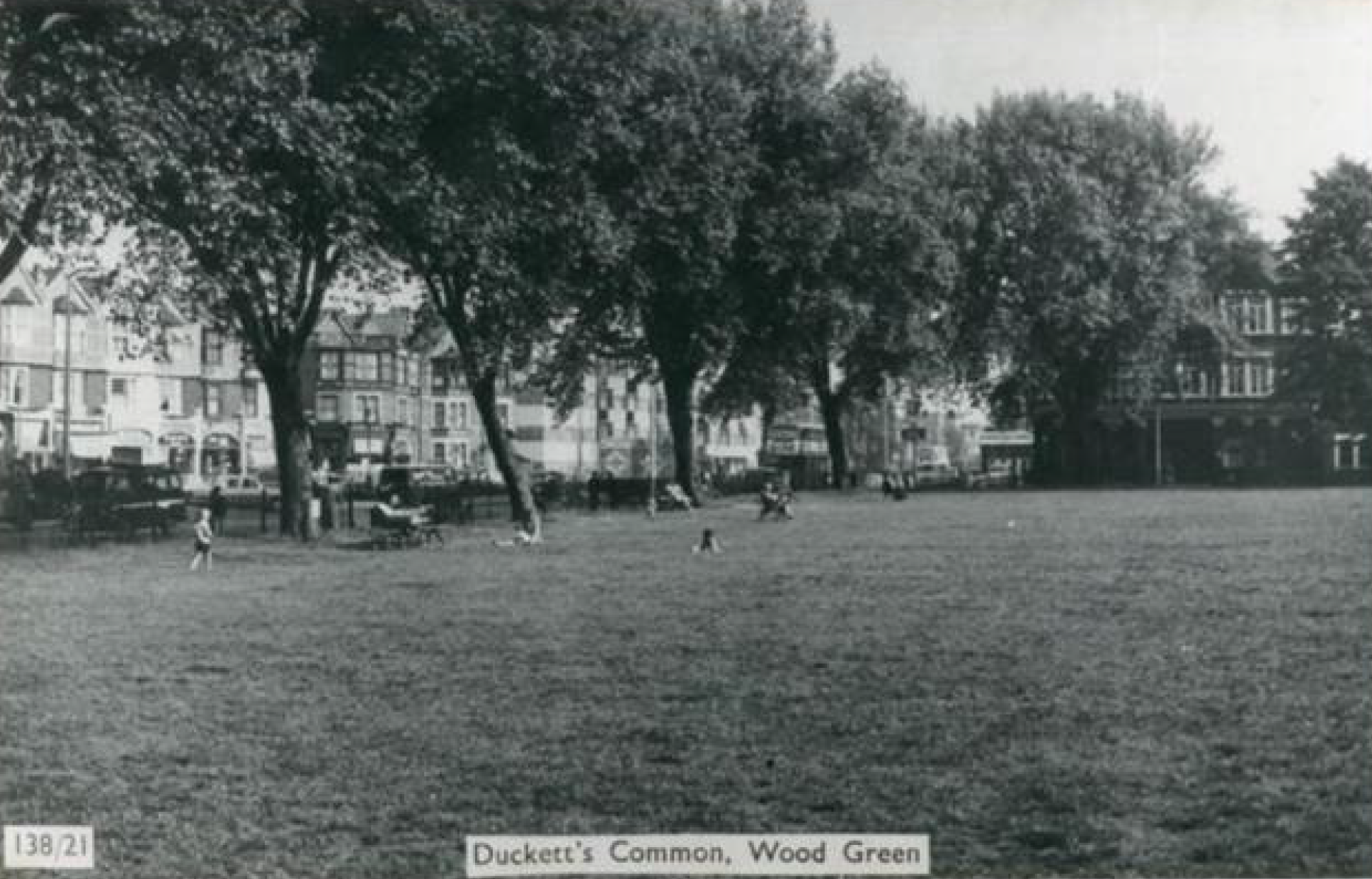 Today, Green Lanes, with the main exception of Duckett’s Common, is neither particularly green nor a series of lanes, but it is still an important conduit between north and central London. It has always been a place of commerce, attracting people to it from all over the world. So now while wandering around Green Lanes, when you see Duckett’s Common or Duckett Road in Harringay, maybe you can think of all those people – noblemen/women, merchants, farmers who lived there so long ago, and in more recent times a place of activism to come together to fight for equality and the safety of our young people: a place where communities have made the area their home. You’re in fine company.

If you want to get involved or find out more about the area, a good place to start is with the Friends of Duckett’s Common or join in with the discussions/ follow the local heritage and history section on the community’s Harringay Online. You can also read more about Duckett’s Manor in People and Places by Hornsey Historical Society.